The castle of Serifos 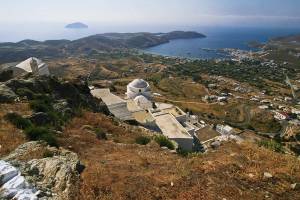 From the medieval castle, the highest “balcony” of Serifos island, one gazes at the horizon and the surrounding Cycladic islands. In the cool breeze of the dawn you will be able to see the sun rising from Paros and Naxos, while in the afternoon the sun will set behind Oros of Serifos (meaning Mountain). When the atmosphere is clear you can locate all seven neighbouring islands: Sifnos, Kimolos, Milos, Paros, Syros, Tinos, Mykonos. The churches of the castle are: Agia Varvara (post-Byzantine), Christos (Christ) (1895), Agios Konstantinos (19th century), Agios Ioannis o Theologos (a Post-Byzantine church. Legend has it that in its catacombs lies the head of Medusa who, according to the Greek mythology was placed there by Perseus). The habitation of the area has been continuous since ancient times. The initial core of the town was built on the top of the rock, where as Xenophon mentions there was an organised state with public buildings and temples. At the same spot where that city used to be, a town-castle was built during the Venetian rule, which was surrounded by 3 consecutive and concentric fortifications. According to the Code of the Taxiarchis Monastery, the organised habitation of the island, in 1754, was limited at Chora and consisted of 244 houses. The security that Serifs residents felt during the post-revolutionary period, made them to extend in other parts of the Island as well, outside the castle, where they developed new settlements. The period of the economic acme of the island ended when the mines closed and as a result many houses where abandoned.