Serifos is related to the well-known ancient myth of Perseus and the horrible Gorgon Medusa, who literally petrified with her gaze anyone who would look into her eyes. According to myth, it all started when the king of Argous named Acrisius, received an oracle from Delphi, that his own grandson, born by his daughter Danae, would kill him. In order to protect himself from the oracle that might come true, Acrisius locked Danae away. However, he did not take into account the sudden love of Zeus, who came in as golden rain and gave her a son, Perseus. Acrisius, unwilling to kill the divine grandson, locked Danae and her son in a wooden chest and set them adrift at the Αegean sea. The chest cast out in the coast of Serifos. Despite the good intentions of king Dictys -who grew Perseus as if his son- the second king of Serifos, the cunning Polydectes, fell in love with Danae. Wanting to get rid of Perseus he sent him to bring him the head of Medusa. With the help of godess Athena and Hermes, Perseus managed to find Medusa. He used his shield as a mirror so Medusa saw her horrible gaze and petrified herself. Perseus returned to Serifos with Medusas head in his bag. When king Polydectes and his council asked to see the head  they also petrified, forming according to myth, the human shaped mountainous rocks that are found on the island. When Pursues left the island, he took the Cyclops with him in order to built the fortification of Mykines. 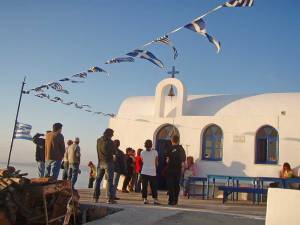 The Festivals. As exemplary hosts, the owners of the celebrating churches invite visitors to join them at the built tables, found in every country church; they offer wine and traditional dishes and soon after everybody starts dancing in circle “syrto”. The locals keep the mores and customs inherited from their ancestors alive; so each year there dozens of well organised festivals take place.

The Archeological collection. It is located in Chora and features statues, tombstones and cinerary urns of the Hellenistic and Roman period. The findings are from the area of Chora. For more information: +30 22810 52611.

The Folklore Museum.It features utensils, textiles, porcelain objects, tools, traditional costumes. There is also a room full of rocks and semiprecious stones from Serifos. It is located in Kato Chora; it was founded in 1976 by ​​the Association of Serifians in order to preserve the local traditional heritage. On the back side of the museum there is a 300-seat open theatre where the summer cultural events take place. For more information contact: +30 22810 51181.